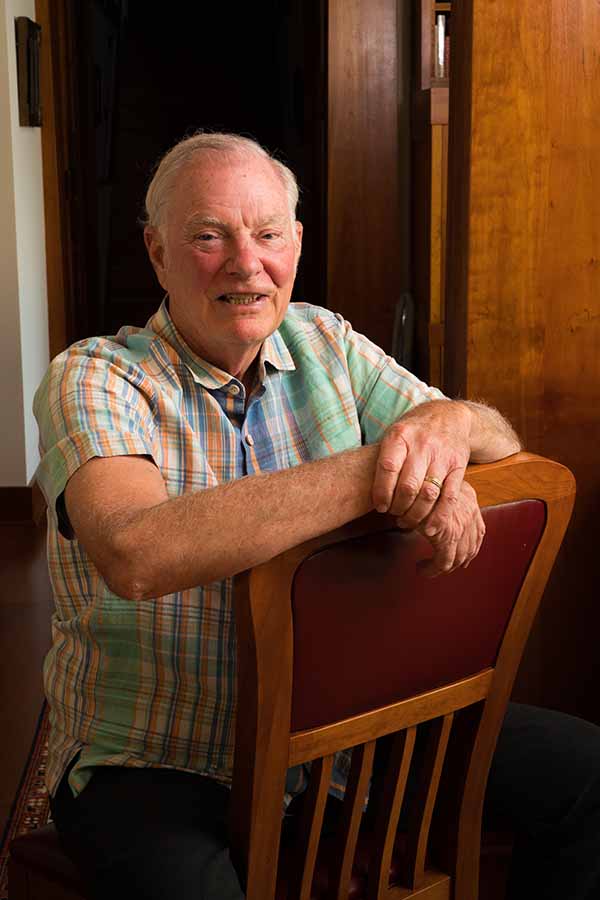 “After one semester in metallurgical and three in electrical, I switched to civil because it wasn’t as narrow,” he says. “You have hydrology, steel design, concrete design, soil mechanics — lots of variety and real-world applications.”

Laufer knew his major would provide a good foundation for whatever he did. But the story took another twist as he was about to graduate.

“I interviewed with three construction companies but didn’t get a job offer,” he says. “A fraternity brother recommended I look at oil companies. I interviewed with Shell, Gulf (now Chevron) and Humble (now ExxonMobil) and got offers from all three. They were looking for warm bodies with decent grades and a willingness to be trained.”

“It couldn’t have been a better experience,” he says. “I had a lot of responsibility from the start.” After three months in a Shell training program with about 200 other new hires, he spent a year as a field foreman “learning what makes an oil field tick because you don’t learn that sitting in an office.”

After 10 years with Shell, Laufer co-founded a petroleum engineering consulting firm with a former Shell colleague on the faculty at Texas A&M University.

“My business partner was a well-known guru in reservoir computer analysis and fracture stimulation design,” says Laufer. “It was theoretical, cutting-edge stuff that stretched me. I’m more of a hands-on guy.”

Laufer sold his interest in 1980 and worked for small oil companies before co-founding Bois d’Arc Energy in 1983.

“I learned how to drill wells, finance wells, and handle the land and legal aspects of wells,” he says. “I needed a geologist or geophysicist, but I could do everything else. Our first two wells were highly successful, otherwise I’d be selling shoes today.”

When the oil industry went into a tailspin in the 1980s, Laufer took advantage of the downturn to begin aggressive acquisition.

“My greatest challenge was building a small oil and gas exploration company from the ground up . . . the culmination was ringing the bell on the floor of the New York Stock Exchange the day of our initial public offering.”

“We bought leases from people who wouldn’t have sold them to us before 1983,” he says. “Many people were fearful about the future of the industry but we didn’t know any better, so we kept acquiring drilling areas for next to nothing.”

Over the next two decades, Laufer steered Bois d’Arc into continued growth — and took the company public in 2005.

“My greatest challenge was building a small oil and gas exploration company from the ground up,” he says. “The culmination was ringing the bell on the floor of the New York Stock Exchange the day of our initial public offering.”

The company sold in 2008 and Laufer retired, although he continues to invest in entrepreneurial ventures and oversees the Wayne Laufer Charitable Foundation with his wife, Gayle. The Laufers support many philanthropic causes and in 2009 established the Wayne and Gayle Laufer Endowed Chair in Energy at Missouri S&T. A member of the Academy of Civil Engineers, Laufer remembers his Rolla years for their academic rigor — and the one week in March when no one cracked a book.

“I have good memories of Rolla, my Sigma Pi fraternity brothers and St. Pat’s,” he says. “We spent hundreds of hours making cudgels and stuffing crepe paper into chicken wire holes to make floats. The rest of the year there was a lot of peer pressure to study. We didn’t slack off. If I applied today, I’m not sure I’d be admitted.”