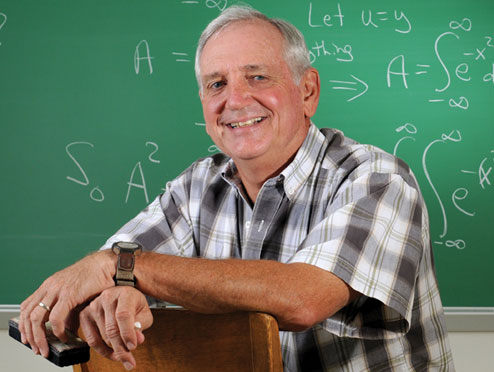 Col. Thomas "Tom" Akers, Math'73, MS Math'75, is a veteran of four space shuttle missions and was S&T's first astronaut. He has spent more than 800 hours in orbit, including more than 29 hours of extra-vehicular activity (space walking). In each of his flights, he was a mission specialist. Aboard Discovery in 1990, he was instrumental in deploying the European Space Agency satellite Ulysses. During his second flight, this time on Endeavour, Akers and fellow astronauts repaired the non-functional Intelsat VI-F3 satellite. His third shuttle mission, also aboard Endeavour, resulted in a repaired and upgraded Hubble Space Telescope. On his last mission in 1996, Akers and the crew of Atlantis rendezvoused with the Russian Space Station Mir. After retiring from NASA and the Air Force, Akers served as a math instructor at Missouri S&T for more than a decade. He retired in 2010.

Interesting note: Akers and the rest of the STS-61 crew made cameos on Home Improvement in 1994.

S&T: It sounds like the shuttle program has run its course. What are your thoughts? What's next?

Akers: NASA's next plans are currently up in the air. The Constellation Program has been in the development stage for a few years and its goal was to put humans back on the moon and then ultimately go to Mars. However, that program is being reconsidered and it's anyone's guess what the new (if any) plan for human exploration will be in the near term. Of course, we still have the International Space Station in orbit with six astronauts from different countries living and working in space. Current plans are for it to be operational until around 2020 or so.

S&T: What kinds of things go through your head at liftoff?

Akers: Liftoff was one of the best parts of space flight ... lots of noise but not violent ... but you're really thinking about the job you have to do in eight minutes or so when the engines cut off. Or if you're on the flight deck, you're monitoring instruments.

S&T: Did you get more satisfaction out of your NASA career or from teaching? (Loaded question, right? It can be a combination of both.)

Akers: It's a different kind of satisfaction. Of course I felt very fortunate to get to go to space and I got to do things I never dreamed of. On the other hand, I always wanted to teach at the college level, and in fact I was looking for a junior college to teach at when I was offered the job of high school principal in my hometown of Eminence, Mo. After four years of that, I went looking for an easier job and joined the Air Force. I got interested in flying when I was 30, and the rest is history. So coming back to teach in the math department at S&T after my Air Force career was really what I always wanted to do ... and I've loved the last 11 years. To see a student's eyes light up with understanding was such a thrill and I know I'm going to miss that.