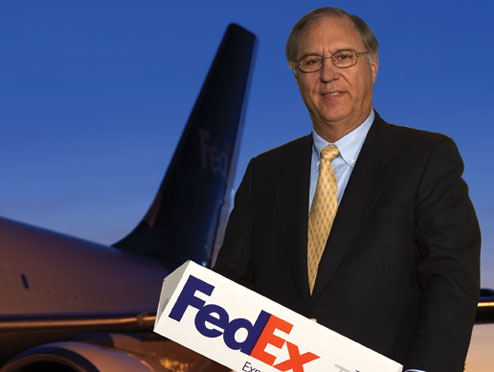 Ted Weise, EE’67, was hired as Federal Express’s 23rd employee in 1972. He retired in 2000 as president and CEO of the global corporation.

During his first year, Weise was responsible for building the Federal Express hub and office facilities at the Memphis International Airport. At the time, Federal Aviation Administration regulations only permitted the company to fly with a payload of less than 7,500 pounds. Thirty-three Falcon business jets were converted to cargo aircraft. Today, the first converted Falcon is on display at the Smithsonian Air and Space Museum.

Due to the limited capacity of the Falcon fleet, the fast-growing business was renting supplemental aircraft from operators around the country. The first was Baron Aviation, based at the Vichy Airport north of Rolla. Lee Maples and S&T graduate Ed Schmidt, ME’67, had several DC-3s that were put into service. Baron Aviation continues to be one of the largest supplemental feeder carriers for FedEx, using modern Cessna Caravan cargo aircraft.

Weise says the turning point for the company was when Congress approved legislation that allowed FedEx to employ aircraft of any size. They purchased used Boeing 727s from United and other carriers, and converted them from passenger aircraft to cargo freighters. Eventually, FedEx acquired a wide-ranging fleet of large aircraft, including Boeing 777s.

Customer service drove the decisions. “As the package counts increased, it became very clear that tracking the packages from pick-up to delivery was as important to our customers as physical transportation,” Weise says. “We developed the largest private computer system in the world.”

A jet-rated pilot, Weise continues to fly for pleasure and business while serving on S&T’s Board of Trustees, on the board of directors of two start-up companies, and as director on the boards of two non-profits.