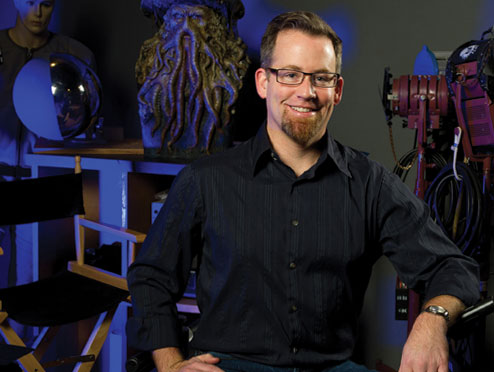 Entertainment Weekly called Davy Jones from the Pirates of the Caribbean one of the most convincing computer-generated characters in film history. The technology used to create that character and many others was developed with the assistance of S&T grad Steve Sullivan, winner of three Academy Awards.

A long time ago, Sullivan watched the original Star Wars films in awe. But it wasn’t until he saw a behind-the-scenes program on the making of Jurassic Park that he decided to get into the special effects business. “The technology at the time was very laborious, very primitive,” he says.

Sullivan, EE’89, is a senior technology officer for Lucasfilm Ltd. In addition to the Pirates of the Caribbean films, he contributed to the making of the Star Wars prequels and the Iron Man movies. He also worked on Avatar. For his efforts, Sullivan won Academy Awards for technical achievement for the Mars matchmoving system (2002), an image-based modeling system (2006) and the Imocap on-set motion capture system (2010). The academy didn’t attach specific films to the awards.

In 1975, George Lucas founded Industrial Light and Magic, a division of Lucasfilm, in San Francisco to create the special effects for Star Wars. Today, among many other things, the company constructs detailed models of actors from photos and captures actor performances on-set to use in the creation of computer-generated characters. “We also create interactive systems for directors to quickly construct and envision scenes ahead of time in the computer,” says Sullivan, who has been working for Lucas since 1998. “This helps directors explore the characters before — and sometimes instead of — going on set.”

Thus far, Sullivan has worked on approximately 50 films. “It’s a thrill to see them show up on TV when I’m channel surfing and remember what went into them,” he says.

Among the celebrities Sullivan has met in addition to Lucas are Steven Spielberg, James Cameron, Johnny Depp and Tom Cruise.

As a student at S&T, Sullivan participated in an undergraduate research project called “An Improved Neural Network for Solving the Travelling Salesman Problem.” After earning his bachelor’s degree, he earned a Ph.D. from the University of Illinois at Urbana-Champaign, where his thesis was “Piecewise-Algebraic Surface Models for Computer Vision.”