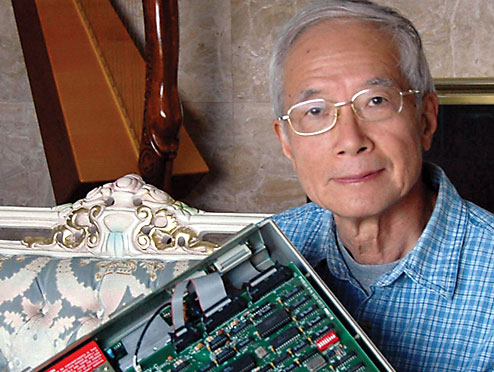 At the dawn of the computer age, only big companies could afford printers. They worked like high-speed typewriters, printing character by character, line by line. In 1967, Philip Chen, MS ME '65, joined Xerox Corp. His first assignment was to design an optical printer that was capable of printing 300 characters per second. "Believe it or not," Chen says, "Xerox was trying to develop an electronic mail system. Instead of using a screen to show email like today, the idea was to print out the message at a remote site like a teletype but much faster."

In 1969, Chen was tasked with developing a high-speed optical printer for mainframe computers, which were only used by large companies. Because the demand for printing was so great in the computer centers of these companies, Xerox knew that a high-speed printer would sell very well even if it was priced in the $150,000 range. Chen, who has several patents in his name, developed the Xenon flash lamp printer, which he considers the steam locomotive of printers.

In the early 1980s, Chen made another impressive contribution to the information age. He designed an optical disc drive that became the predecessor of compact disc drives. The machine was developed for the Library of Congress to store its card catalogue information. "The disc was 14 inches in diameter and stored one gigabyte," Chen says. "I literally hand-made them."

Chen's next big project was to come up with a low-cost image scanner for a company in Taiwan called Microtek. At the time, the only scanner on the market cost $20,000 and it worked more like a photo enlarger than the scanners we know today. "I started the wildest commute between Colorado Springs and Taipei, "Chen says. "By the end of 1984, I finished the first production model and we went to a computer show in Las Vegas that November. It was a hit. It had better features and performance than our only competitor at one-tenth of the price."

Chen has been retired since 1989, but started a company called Avision Inc. and serves as chair, technical advisor and spiritual leader. Today, he's still interested in designing things and making products better. In fact, his hobby is to make harps. "I have made 15 harps and play them at our church services," he says. "I have a patent on my harp design."