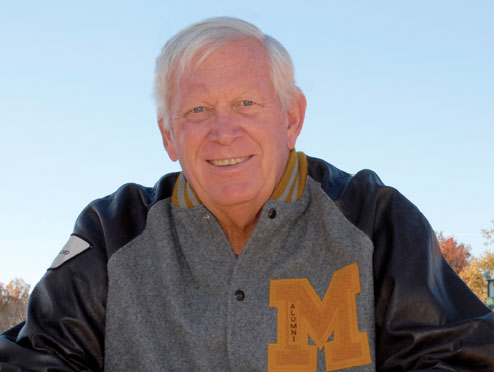 But the reality of sports is that victory is created through hard work and routine plays the RBI single, the 3-yard run up the middle, the offensive rebound. Those are the kinds of efforts that also give us heroes by another name: teammates.

And teamwork "though sometimes so overused in sports it becomes a cliché” is precisely what Keith Bailey, ME'64, is known for, both personally and professionally. He says its a major component for success.

"I believe athletics enriches the college experience for students who are involved in sports," says Bailey, who played both varsity basketball and football at Missouri S&T. "In sports, there's an opportunity to be part of a larger team where your efforts contribute to the overall success of the whole. That is likely the work environment the majority of graduates will find themselves in."

Bailey is the former chair, president and CEO of Williams, an integrated natural gas company with 4,800 employees. He joined the company in 1973 and quickly translated what he learned about teamwork in sports into strategies for success in the global marketplace.

Over the years, Bailey has been an invaluable teammate to his alma mater. He is a longtime trustee whose gifts to S&T include an endowed professorship, an endowed scholarship for student-athletes, an endowed maintenance fund for athletics, and two lead gifts for sports facilities” one for the indoor practice facility, known as the Miner Dome, and one for the football stadium.

When it was suggested to Bailey that the stadium should bear his name in recognition of his contribution to its renovation, S&T's quintessential teammate at first deferred, then finally agreed, but only if it could also carry the name of his former coach, Dewey Allgood.

Today Allgood-Bailey Stadium stands as a testament to the player who preserved it. And to the coach who taught the player the value of teamwork.