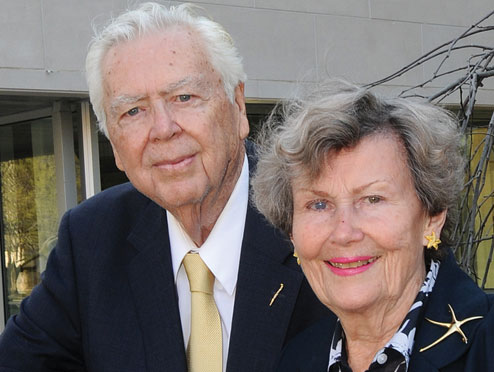 Like nuts and bolts, some things are just meant to go together. Although his background is in mechanical engineering, John Toomey, ME’49, MS ME’51, believes his field goes hand-in-hand with aerospace engineering. It’s a lesson he learned while serving as a Navy pilot in the Pacific Theater during World War II, and it’s the reason he is a fan of both the mechanical and aerospace engineering programs at Missouri S&T.

It’s also why in 2004, Toomey made a substantial pledge for the modernization of the mechanical and aerospace engineering building on campus. As a result, the old ME Annex — constructed a year before the Wright Brothers’ first flight — was razed to make way for a spacious, modern wing, while the main building was renovated for the first time since the late 1960s. The building, completed in 2009, was renamed Toomey Hall.

One of the features of the new building is the Product Innovation and Creativity Center — a setting designed to foster collaborative learning and brainstorming. Such facilities make the building — as well as the programs it houses — more attractive to prospective students and faculty, Toomey says. They also contribute to the university’s stature on a national level. “It’s amazing how new facilities help raise a department’s profile and inspire students.”