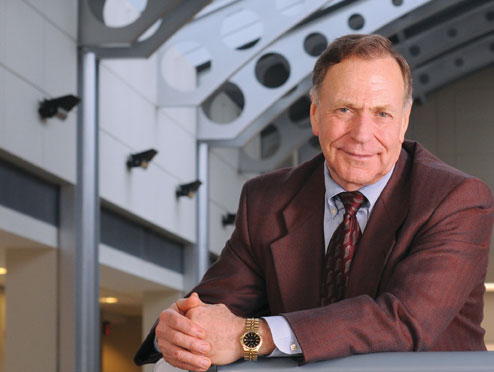 In the life of any university, there are alumni whose contributions make a difference beyond the ordinary. Some make financial contributions that transform the campus or the educational experience. Some devote outsized portions of their lives in volunteer service. John Mathes, CE’67, MS CE’68, has done both.

To watch him, you’d think he was on the university payroll. Mathes’ considerable and nuanced understanding of the Rolla campus, its people, its operations and its psyche was informed by countless hours spent in the trenches — as a member of the University of Missouri Board of Curators, a Missouri S&T trustee, a member of the Academy of Civil Engineering, a volunteer fundraiser, and a mentor to university faculty and staff.

Before retiring, Mathes headed his own multidisciplinary engineering business that specialized in high-profile contamination projects. John Mathes & Associates Inc.was acquired by Burlington Environmental in 1988, but Mathes stayed on to lead the operations until 1992.

Mathes and his wife, Susan, also established the university’s first endowed faculty position under a program that matched state funding with private gifts. In 2006, the Matheses made an additional gift to elevate that professorship to the Mathes Chair in Environmental Engineering.

Today, Mathes is the inspiration behind Vision 2020, which picks up where Project 2000 left off. This time the effort is aimed at aligning alumni with the university’s planning process, department by department, to ensure a solid strategic footing for years to come.