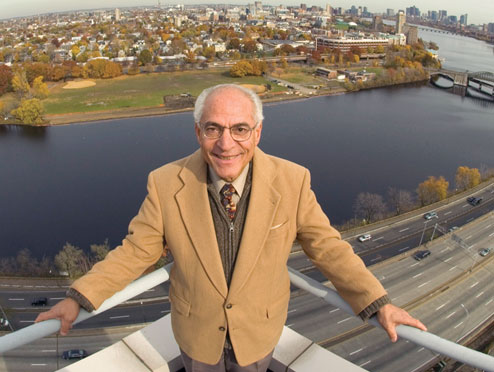 Free of rocks and flat enough for a safe landing, the Sea of Tranquility turned out to be the spot. Farouk El-Baz, MS GGph '61, PhD GGph '64, used remote sensing to help NASA officials determine that this was where the Eagle would land on the moon back in 1969. Later, the producers of Star Trek: The Next Generation celebrated his work by naming a spacecraft, El-Baz, after him.

Now, El-Baz is director of the Center for Remote Sensing at Boston University. He's also a member of the National Academy of Engineering and recently served on an NAE committee that identified the top 14 engineering challenges for the 21st century.

One of the big challenges the world faces is a shortage of clean water, and one of El-Baz's passions is studying deserts in places like Darfur to find hidden sources of water. The Geological Society of America has established two awards in his name for desert research, one for professional excellence and one for students. "I feel most accomplished when my work results in the location of water for people who need it most, particularly in dry desert regions," he says.

El-Baz learns more about places like the Sea of Tranquility and Darfur by studying them from afar -- using space probes, satellites and other types of sensing methods. The technology has many different forms and applications. El-Baz used remote sensing to unveil a 4,600-year-old boat at the base of the Great Pyramid. A sealed chamber containing the disassembled boat was mapped by ground- penetrating radar and thoroughly photographed. The air was sampled, temperatures were measured, pressures recorded. According to El-Baz, this was all achieved in a nondestructive way by applying remote sensing techniques.