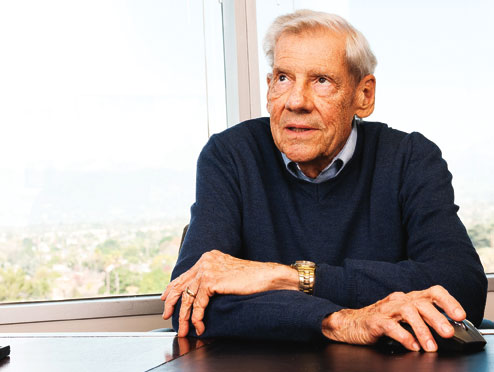 Ed Tuck likes to quote the jazz pianist Thelonius Monk, who said: "The only cats worth anything are the cats who take chances."

Tuck, EE '53, is the principal of Falcon Fund, a private investment fund. He has invested in things as diverse as a semiconductor corporation to a company that uses advanced research for relationship facilitation.

"I'm a guy who helps create companies," he says. "Most of them are failures. To the extent that my venture funds have been successful, it's because we've had a lower failure rate than unsuccessful funds."

As founder of Magellan Systems, Tuck began what is today the handheld and embedded GPS navigation industry. A couple of years later, he had another "crazy" idea -- that low-Earth orbital (LEO) satellites could be used to provide low-cost, high-bandwidth data and telephony to any location on the planet. He pulled together an engineering team, solved the orbital problems, secured the patents, and founded the company called Teledesic, which planned a "Broadband in the Sky" network. The company was backed by Craig McCaw, the cellular phone pioneer, and Bill Gates. While Teledesic's funding was a victim of the telecoms' market collapse, the concept and architecture are being used in at least two new satellite systems.

When Tuck gets involved in a start-up venture, he typically runs the company as CEO until he can determine if the business is going to thrive. Sometimes he just provides seed money. "One early-stage investment of which I'm very proud is Napo Pharmaceuticals, which has a drug, Crofelemer, now in final trials," Tuck says. "It stops childhood diarrhea in its tracks. When it rains in Mumbai, children die by the thousands. This will save a lot of lives. And it will help AIDS patients, too."

A big supporter of private space flight, Tuck provided some of the seed funding for the X Prize. "Somewhere along the line, probably around 1996, Peter Diamandis came up with the X Prize," says Tuck, a pilot who has owned and flown a pressurized Baron and a jet helicopter. "He immediately beat me up and made me contribute a little seed money. He collected similar amounts from nine or 10 other people, and then went out and did his thing."

Fortunately for Tuck and his fellow investors, the Ansari family got involved by paying an insurance premium, which protected them in case the X Prize was actually won. Space Ship One successfully made two suborbital flights in 2005. The technology was owned by Paul Allen and designer Burt Rutan's company, Mojave Aerospace Ventures.

Tuck, who believes that Mars will be colonized sooner rather than later, is confident that more and more people will succeed in creating businesses in the space flight industry. "People who have money will want an adventure," he says. "Richard Branson of Virgin Galactic is nobody's fool; he's in the business of hauling people around for money."

As for other industries that are taking off, Tuck cites communications as an obvious example. "Cheap communications allow young people all over the world to share ideas and dreams with people from profoundly different cultures and belief systems," he says. "Telecommunications will become the very fabric of our society, and the world's societies will begin to merge. You can't stop it. Can you make it a good thing?"

Tuck, who once worked as a radio announcer at KTTR in Rolla in the 1950s, has served on 36 boards of directors. He has been named an inventor on 12 issued patents; another nine patent applications are pending. "The issued patents, unfortunately, include the hated Automated Attendant, which presents one with a list of choices when calling a help line," he says. "But they also include assorted satellite system patents, and an electronic means for men and women to locate prospective mates. Active patent applications include matching for attraction and pair-bonding using genetic information from a cheek swab."