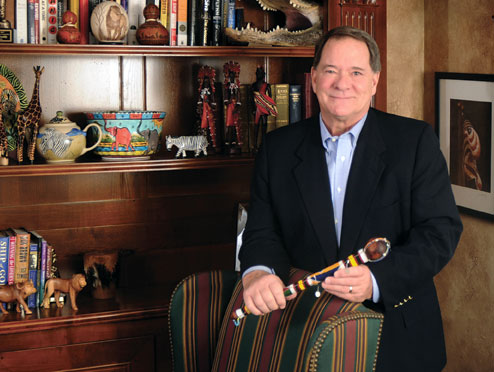 Now that Dick Arnoldy, CE '69, MS EMgt '73, is retired from St. Louis-based Arco Construction, which he co-founded in 1992, he is embarking on a new career of sorts in international finance. He is now in the business of facilitating loans, but not the kind you might think.

Arnoldy is chair of the board for MicroFinancing Partners in Africa, a non-profit organization that provides modest loans to people living in poverty. These are people who would not be considered for loans otherwise; they've never had credit, Arnoldy says. "We can lend money to women making purses. They can buy the material themselves and then sell the product for profit. This way they control their destiny."

According to Arnoldy, the exchange rate in Kenya is about 80 Kenyan shillings to one U.S. dollar. So the individual loans are very small. MicroFinancing Partners makes grants to organizations that lend the money to individuals. The arrangement gives people in poverty a sense of ownership and pride.

In Uganda, Microfinancing Partners has started what they call the Cow Project. Farmers are given a pregnant dairy cow. After the calf is born, they raise it for a year before passing it on to the next family in the program. In order to create a market for the milk, the local diocese started a dairy, where items like chocolate milk and yogurt are produced and sold.

Arnoldy is a trustee and generous donor to S&T whose contributions have supported civil engineering, the Kummer Student Design Center and Engineers Without Borders. He has also established an endowment for study abroad.