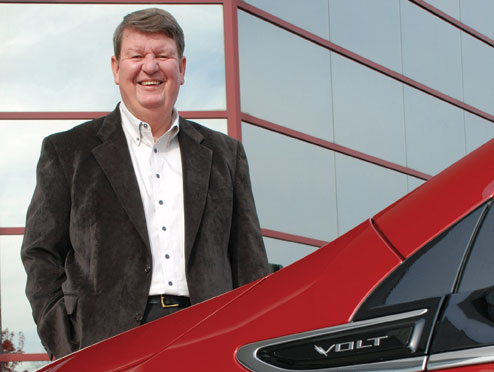 Jon Bereisa, EE '67, MS EE '70, president and CEO of Auto Lectrification, is one of the global automotive industry's "Electrifying 100” the most influential people working on the electrification of the automobile, according to Automotive News. Bereisa's company provides engineering and technology consultation services for hybrid and electric vehicle development. During a 35-year career at General Motors, he was the systems architect responsible for creating the concept of the extended-range electric vehicle that became the Chevrolet Volt. He also served as chief engineer of propulsion systems for GM's EV1 and S-10 electric pickup, and director of advanced engineering and technology strategy for the development of GM's hydrogen fuel cell technology and vehicles. Bereisa also pioneered GM's early control systems, microcomputer chip set architectures and mass production application of microcomputer chip technology.

S&T: Explain how computer chips have been incorporated into vehicles. How have they changed things?

Bereisa: Microcomputers and software controls changed everything on the automobile. The "chip" is everywhere; controlling engine operation, shifting the transmission, doing anti-lock braking, providing stability control in turns and skids, setting the interior temperature, providing remote keyless entry, connecting us to the world of infotainment, navigating, and automatically deploying air bags while calling emergency responders in the case of a crash.

S&T: How will fuel cells change the way cars are made?

Bereisa: A short answer is that hydrogen fuel cells have the potential to fully reinvent the automobile, its energy footprint, its emissions and its sustainability.

Personally I like to call it the "end state for personal transportation." The car evolves without being limited by conventional battery technology performance and with a complete disregard for petroleum. The fuel cell is nature's perfect battery that produces electricity from being fed hydrogen gas and air.

In my opinion, fuel cell electric vehicle (FCEV) propulsion is to the automobile what today's smart phone is to the old rotary dial phone of days gone by.

The FCEV is not a reaction to "peak oil". It is a natural evolution of personal transportation from foot to horse to steam engine to internal combustion engine to battery electric to fuel cell electric drive. The FCEV will come on the scene while leaving petroleum in the ground.

The industry jargon for this technology migration is "electrification of the automobile." It grew into hybrids and is now evolving into battery electric vehicles on its final trajectory to fuel cell electric vehicles. We are seeing this happen on the streets today with the Prius and with the rollout of the Chevrolet Volt and the Nissan Leaf EVs.

The occurrence of accidents will be reduced by automatically intervening with driver steering and braking and automatically avoiding the impact trajectory or stopping the vehicle. Some prototype vehicles today are capable of driving themselves autonomously.